Went for a night ride to the Dirty Duck and back last night. The obligatory 'swift-pint' (or two) was consumed to keep the cold at bay. Chilly it was and the sky was incredibly clear. In fact, it was so cold that I think some water in my gear cables was beginning to freeze as shifting became sluggish. It was a great ride though. I think Phil needs to re-visit the tyre situation as I dont think he would have more tyre drag if he used caterpillar tracks. Tried to take some photos with Karl's camera phone of Karl trying to fix a puncture (damn that hawthorn) with Phils HID light behind him. There was so much steam rising from his back that he looked like he was about to ignite. I dont think they came out very well though. Planning to go out again on Wednesday night as we need all the training rides we can get for Thetford on Sunday. 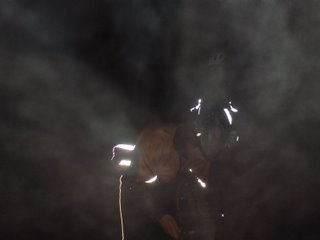